If you have ever wanted to implement barcoding in a Notes application, it may be easier to do so than you think. You really need four things to make it work:

Though the application I am working on is encoding a 12-digit number, we are deploying a Code 128 font so that we will be ready if we expand the use of barcodes into an application that requires alphabetic characters as well. Scanner set up is pretty easy now, with most being able to plug and play with your computer hardware and able to be configured by scanning barcodes. They function similarly to keyboards, in that if you are some sort of input area (eg. a field or even the body of a mail message), the scanner will feed the data from the barcode into the field as though you typed it on a keyboard.

The vendor we used for the font also supplies code for many different applications, including LotusScript. However, to get the number I encoded to print as part of the barcode, I had to take their VBA script and modify it for LotusScript because their LotusScript code does not support human-readable codes. It was a pretty simple code change though. I configured the scanner to append a tab to each scan that it completed (explanation of why is below). I just plugged it in and then scanned seven codes on a sheet that came with the scanner and it was ready to go.

The processing form is displayed as a dialog box that allows the user to set some processing options before the input field is displayed. This is done with a programmable table with the options on one tab and the processing actions on a second tab, with buttons to toggle between the two tabs. This helps to ensure the cursor is in the input field when ready to scan by making it the only editable field visible. 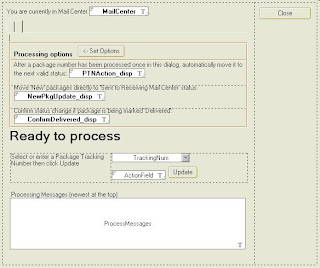 The form has the main input field (TrackingNum) and a second, unmarked input field (ActionField) on it. By unmarked, I mean that it is a simple text field that has the Show Field Delimiters option unchecked. The scanner sends the decoded data from the barcode plus a tab character. The tab moves the cursor from the TrackingNum field to the ActionField field. The processing code is in the OnBlur event of the TrackingNum field; that code takes the number from the barcode, finds the document and updates it as necessary. The ActionField field has code in the OnFocus event to move the cursor back to the TrackingNum field, which makes the dialog ready for the next scan.

This is what the dialog looks like. Processing Messages is a reverse-chronological list of the actions taken each time an entry in the TrackingNum field is processed. 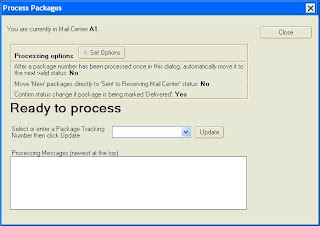 I couldn’t find a lot about barcoding in Notes, and found nothing about how to actually code an application to interact with a scanner, but I did receive a hints from a couple of Lotus peeps that really helped. In the end, it was a lot easier than I expected.

An alternative method to generate barcodes is to use the (free) Barcode4J Java library with a Java agent in your Notes app - saves having to install a barcode font on every PC that might want to use your app.